ANN ARBOR– Citing issues of racism and the need to “drop a few pounds before the holidays,” Hopslam forward Bob Brock announced that he has vowed not to eat until newly-hired GM Tim Wolfe resigned.”I’m hungry,” said Brock, presumably hungry for justice, though sources state that he may have said this prior to the hunger strike, more than likely several times throughout the week/month/year, often more out of boredom than actual hunger. 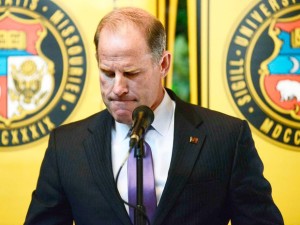 Wolfe accepted the GM position after stepping down as the president of the University of Missouri earlier this month following campus unrest over racial tensions. Brock, righteously indignant, initially refused to play, skipping last Saturday’s forfeit win over St. Anky Beer. However, Brock returned for Tuesday’s 4-1 win over Gates after lawyers and nutritionists noted that players can easily burn 800-1100 calories per game, “even if they don’t back check.”

Wolfe was not available for comment, but did express hopes that Brock would end his hunger strike soon, citing that he is still a “growing boy.”

Incensed, Brock vowed he would not be deterred and except for lunches, dinners, midnight snacks, and of course Thanksgiving, he would not eat again until Wolfe stepped down, and maybe if he’s “really, really hungry and if McDonald’s brings back the McRib sandwich.”

Brock also said that he will only drink one beer after hockey and one before bed time to show Wolfe how truly resolute he is concerning this matter. Teammates expressed amazement over the final statement, praising him for his “intestinal fortitude” and the “extra beers” they’ll finally get to drink.