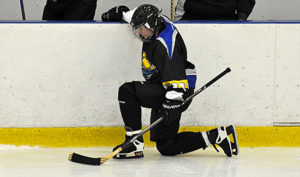 ANN ARBOR– Several players were spotted “taking a knee” throughout Ruination’s 6-3 win Monday night against Black Ops as part of a protest against fatigue, sources report. “I’m protesting the lactic acids building up in my muscles by taking a knee,” said left winger Caper Colinaeck. “It’s what I do when I feel fatigue.”

Other players voiced approval and added that they will often add “hunching over on the bench,” “heaving for air,” and sometimes “throwing up” as part of their politically-charged fight against fatigue.

Goaltender Robert Delorey was seen taking a knee, which he claimed was to “stop the puck.” Officials did not see it that way and awarded a goal to the Ops.

League president Ronald Thump was quick to castigate team members, tweeting that such behavior was “unacceptable” and that “you don’t see victims in Porto (sic) Rico taking a knee on the ice.”

Some players in an attempt to avoid controversy, simply leaned on their sticks between plays or else were spotted skating at what is often called “half speed” to protest fatigue.