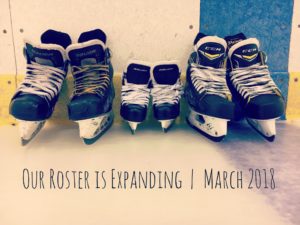 REDFORD– GM Mark Woods has made a number of provocative trades in the past to get early draft picks, and none more so than the most recent trade that sent forward Zeb Bruckman to Montana for a draft pick in 2036. “I got a real good feeling about this kid,” said Woods by way of justification.

The cryptic comments are part of a series of mystifying hints and allegations coming from the front office since July. Players have been added and moved to farm teams, traded outright, or placed on Injured Reserve for what seem to be fairly minor injuries. “I wanted to skate so bad,” said forward Ginny Woods Sunday prior to Aventinus’s 4-1 win Sunday night.

Woods has been on IR since July for a broken tibula.

The GM has maintained that “everything will make sense soon enough.”

Said Woods: “I’m telling ya, this kid is going to be great!”