ANN ARBOR– Chris Sutton was seen proudly strutting about the locker room Saturday night as he talked to reporters following Ruination’s 6-3 win over the Spicy Boys. “All I’ve ever wanted was to be half as productive as (Brian) Lefevre, and now I am!” said a jubilant Sutton. 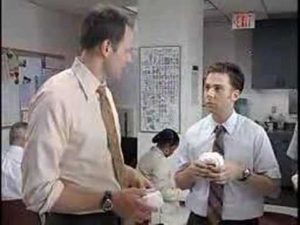 Concern in locker room could be felt throughout as the Spicy Boys moved down from the B-League to threaten the C-League champion Ruination team. “They’re a good team with solid players, especially Baby Spice,” said Woods.

Concern soon turned to relief as the team poured on the offense, as Andrew Thompson added 2 goals, and Tom Angers happily added his own goal of being half as productive as Thompson. Netminder Anthony Ciatti was solid throughout, giving up only 3 goals.

Said Ciatti: “When you beat the Spicy Boys, you become the Spicy Boys!” The team celebrated by heading to Burger King and watching old commercials featuring Joel McHale. “Yes, that’s really him from 2003,” sources confirmed. It was also noted that the guy who actually said he was spicy has gone on to fame and fortune as a Discover Card customer service representative in their recent line of commercials. “How do you remember this stuff?” said sources married to me.