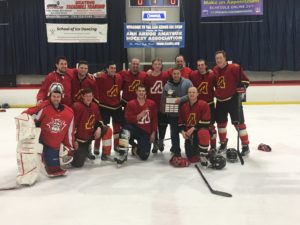 GM Mark Woods expressed gratitude to the team in the locker room following the game. “Thanks, guys, and congratulations!” Woods noted that the back-to-back championships have “finally added championship rings to each thumb.”

Woods then noted that he was looking forward to the next ten championships, though championship toe rings may make him “look like a douche.”

Ruination looks for its third straight title starting next Tuesday.