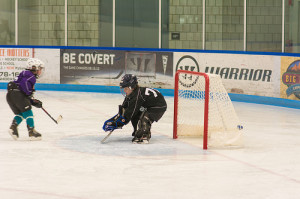 The future of Ashley’s hockey seen at Joe Louis. The Red Wings played well, too, though the game would have been decidedly more enjoyable if the scalper hadn’t lied about how good the tickets were. Whatever.

DETROIT– Ashley’s GM Mark Woods finished his hiatus at Camp Redford with a hockey game from the rival “National” Hockey League Friday night, watching the Red Wings defeat the New Jersey Devils 4-2 at Joe Louis Arena. Woods said that he was very impressed with the high level of skill of the players, calling them “consummate professionals.”

Several Red Wing players expressed excitement and interest at joining the Ashley’s franchise, as evidenced by their elevated level of play and the posturing at the end of the game, bowing and raising their sticks in an attempt to gain the GM’s attention.

Said Woods with a smile: “These guys were great, but I think the kid who scored the lone goal in the mite’s game during the first intermission may very well prove to be the future for Ashley’s hockey.” The presently unnamed 6-year old in fact skated past ten opposing players for a break-away goal, roofing it with less than 0:10 left in the three minute game to give his team the only score of the match.