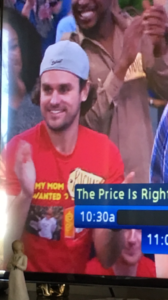 Winowiecki cheers on contestants on The Price Is Right before heading to Dancing with the Stars, where he will perform a solo hip hop routine set to air March 31st.

HOLLYWOOD– Goaltender Ricky Winowiecki celebrated his 11-1 win over the Black Bears Saturday night and Ruination’s 8-0 topping of Black Ops and its 17-6-1 regular season record by visiting California, part of the Ashley’s Goodwill Tour, appearing on The Price Is Right, which airs weekdays on CBS.

Lost in the excitement of the lights and camera crew was Winowiecki’s stellar performance keeping the Black Bears to only one goal adding an assist to his performance, while center Mike Weber scored an astounding 8 goals for the night. Not to be outdone, Jeff Phillion gave Ruination its only shutout win of the season Tuesday night.

“You know what?” said Winowiecki. “I will have my pet spayed or neutered.”