GULFPORT– Cyrus Gold, once more popularly known as Solomon Grundy (purportedly born on a Monday), lamented recently the noticeable lack of star power over the years. “Solomon Grundy used to be somebody,” Grundy stated with his noted Southern accent.

“Now, nobody knows Solomon Grundy. Or the Legion of Doom! All kids know is video games!” added an increasingly agitated Grundy. 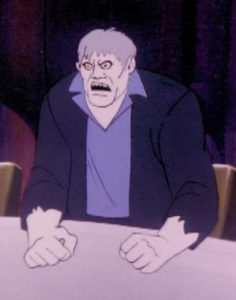 Solomon Grundy laments his loss of fame and fortune, resulting in even shabbier clothes

Grundy, who lives in Gulfport, MSm and now subsists on shrinking royalties and Comic-Con  appearances, was best known for his work in Challenge of the Super Friends, where he worked along side such greats as Brainiac (Brian Ac), Lex Luthor (Luther Alexson), and Sinestro (Juan Gomez). While some went on to have successful careers, Grundy has had a difficult time staying mainstream. “Scarecrow (Jonathon Crane) had no talent, but him okay,” said Grundy. “Where’s Solomon Grundy’s Mrs. King?”

Gruny was referring to the popular 80s detective show Scarecrow & Mrs King, where Crane played along side Kate Jackson, of Charlie’s Angels fame.

Unfortunately, fans today may only know Grundy from the last recorded meeting of the Legion of Doom, where the meeting was derailed by a number of administrative gaffes, punctuated by Brainiac and Grundy both demanding a “pair of pants.”

Ruination forward Mike Marino, upon hearing about Grundy’s plight, simply replied, “Who? Over my head.” Marino, 24, admitted that he is largely unaware of cartoons that aired nearly 40 years ago, but was able to name all characters and plot lines from the Halo and Assassin’s Creed video game series.