BANGTOWN– Following a 5-3 shootout at the Ice Cube Corral Saturday night with the Liebherr gang, friends and kin of William “Wild Bill” McDermott claimed to have “avenged” the loss of their comrade in arms. 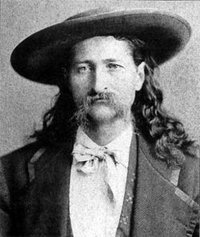 Known informally as the Sutton Clan, Sean “Wyatt” Sutton led his family to Bangtown several years ago in the hopes of finding a better life after several incidents as a lawman reffing in Kansas City, where brother Bill and Chris opened a saloon and gambling parlor.

Unfortunately for the Suttons, the rival clan of Liebherrs, led by “Curly Nate” Peck had already established dominance in the Friday F-league region, forcing the Suttons back onto the ice despite their efforts to stay away from “the game.” An alleged brawl took place January 28, in which McDermott was not seen again. 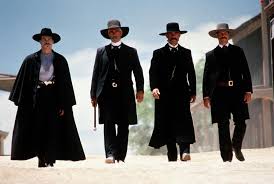 Sutton’s posse warms up prior to the Bangtown game. Right to left: Woods, Colis, Sutton (Chris), and Sutton (Sean)

In an ambush set to take place early March, defenseman Chris Sutton and ally Alex Yerkey took down several Whiskey Dekes, with Sutton yelling a warning, “The Lieherrs are finished, you understand me? Tell all the other teams the law’s comin’! You tell them I’m comin, and hell’s comin’ with me, you hear that?”

Added Sutton: “Hell’s comin’ with me!”

The shootout took place Saturday, with the Suttons aided by longtime friends Texas Tom Colis and Doc Mark Woods, who agreed to be the “huckleberry,” scoring two goals. “I got two goals, one for each of you,” he said to Billy Clanton.

Following the game, several players wondered why Woods agreed to play, knowing he had two other playoff games in higher leagues. “Chris Sutton is my friend.” stated Woods.

“Shoot, I got lots of friends,” said Robert Texieria.

Woods, suffering from a cold, was last seen coughing prior to the next game. Said Sutton: “We avenged Bill, that’s what matters. Thanks Tom. Thanks, Doc.”

McDermott, who was found in his apartment studying for a Phys Ed final, was stunned by the news. “Huh?” he said in gratitude.

Colis later asked: “Why does Woods get to be Doc Holiday?”