ANN ARBOR– Not since the Wizard of Oz himself handed a heart to the Tin Man has a higher honor been bestowed than early Monday morning as Hopslam finished their on-ice drills following its Saturday night win over the Cleveland Steamers 6-0. “For valor in the face of douchebaggery, I proclaim thee Mr. Sutton, a true bawse!” stated GM Mark Woods.

Added Woods: “I think that’s slang for ‘boss,’ which is slang for someone who is super cool and in charge, or some such. I’m not a millennial.” 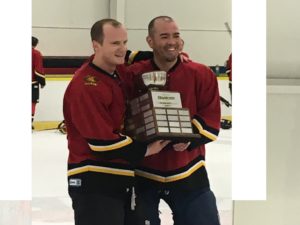 Sutton received the award as a result of an on-ice incident involving Steamers player Crank Jerk (names changed to protect to cowardly), who after taking a penalty from defenseman Jim Rooney retaliated by cross-checking unsuspecting defenseman Mark Woods.

“I thought he (Woods) was dead,” said Sutton, who promptly slammed into Jerk yelling, “You don’t hit him, He doesn’t touch anyone!”

Indeed, Woods vowed never to harm anyone following a dubious career in the Mexican Wrestling Leagues in the late 1980s. Known as “El Whappo,” he was reportedly a ferocious fighter and “pretty good bass player.”

Referee Yewkno Whatshisname,a practicing psychiatrist, who called the action “rational cowardice,” told Ashley’s News Network (ASN) that he felt Sutton’s actions were justified, while Jerk’s was not. “Oh he knew who hit him… the big guy (Rooney). He also knew better than to tussle with him, so he picked the little guy (Woods).”

Said Woods to Sutton while handing the award: “Thanks for having my back.”