BOZEMAN– Montana is the site of many wonders of nature, including Yellowstone and Glacier National Park. However, a new natural wonder can be included with the release of Zebediah Bruckman back into the wild. “He’s in his natural habitat,” said a beaming Leann Park, park ranger. 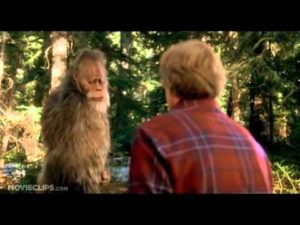 Bruckman (left) grudgingly walks away from Ashley’s hockey to enjoy his new home in Montana.

Bruckman had spent the better part of three years skating with Ashley’s Hopslam and Ruination, but teammates and coaches knew it was on borrowed time.

“I knew it was on borrowed time,” said Jon Jon regarding Bruckman’s release, known both for being redundant and for often repeating things over again.

“It wasn’t easy,” said trainer Catherine “Mister” Jinx. “Zeb was clearly torn between hunting deer here or moose over there.”

Added Jinx: “I hate those meeces to pieces.”

The task of releasing Bruckman fell on the GM’s shoulders. Said GM Mark Woods: “It was heartbreaking. At first I thought he would happily return, but he just stared back at me. And, I wanted him to stay with us, but I knew it was wrong.”

Woods was forced to begin yelling at Bruckman that “we don’t want you anymore!” and “why don’t you go back where you came from?!” through tears while teammates looked on sadly. Bruckman, haltingly turned away as Woods said quietly, “good-bye, my friend.”

When asked, Bruckman looked confused. “I haven’t even left for Montana yet, and I offered to played a few games before I moved, but no one said bleep!’

Bruckman, in 178 regular season games, scored 38 goals and chipped in 57 assists. He also added 3 goals and 3 assists in 24 playoff games.

← Sutton Given Highest Honor
Mundane Ghosts of Past Relived →