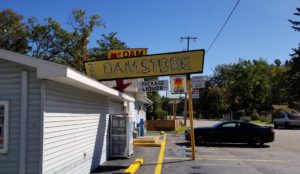 Woods visits places of nearly no interest to anyone not involved in fishing, boating, or making up sentences with expletives.

OSCODA– Defenseman Mark Woods reflected on his journey to Beer League greatness Saturday before Hopslam’s 3-3 tie with Sasquatch with a visit to his adopted home town of Oscoda, MI, Saturday. “Lot of memories in this place,” he said bemused.

Added Woods: “Most of them were bland.”

Woods spent most of the day pointing out places and events that could have and most probably happened in every small town in the United States. “That used to be the Ben Franklin,” muttered Woods upon driving into the township limits on US-23, referring to the arts and craft chain store found often in smaller towns. “And the bookstore is now across the street… but it looks empty, too.” 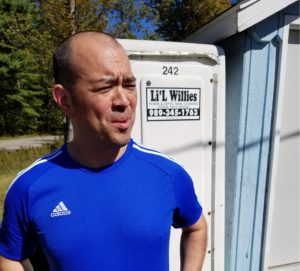 Unable to complete the “one thing” not done in high school, Woods settles for completing the task nearby at the Dam Store.

The defenseman noted that the Arby’s “next to the McDonald’s we all hung out at” is now a local Mexican restaurant. “And the KFC, where I got my first job is now a KFC and Taco Bell.”

The highlight of the afternoon included a trip to the Oscoda Area Schools, where Woods went through junior high and high school. Unfortunately, the building was locked, and Woods was unable to perform a misty-eyed walk through of a school in which he only lettered in tennis his senior year.

“There was really only one thing I didn’t do in high school, and I was kinda hoping to cross that off the list after almost 30 years,” said Woods. Instead, he had to settle for accomplishing that task at the Dam Store just a couple miles west of the school.