ANN ARBOR– Ever for the flair for the dramatic, Ruination waited until literally the last second in order to extend their unbeaten streak to 18 games stretching back to November 4 of last year, and their fifth straight win over the Dragons.

“That’s hard to believe,” said GM Mark Woods. “Mostly because I don’t think anyone ever bothers to check the stats.”

The game started with a cry for help, as Ruination dealt a game time trade with Hopslam, sending defenseman Mark Woods to Ruination in exchange for having Mark Woods not continue dragging down Hopslam. “Good trade,” said Hopslam GM Mark Woods. 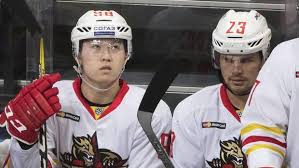 Woods looks somewhat despondent after going -2 in Ruination’s 5-4 win over the Dragons.

Woods came into the game and was an immediate factor, allowing Dragon Paul Espinosa to easily score on a one-on-one. Woods would later allow Robert Carnacchi to score in like manner later in the second period.

“Good trade,” reiterated GM Woods, noting that Hopslam went on to win 5-2 over the Ice Men that night.

Tom Angers (goal) and Marty Sisolak (goal, assist) arrived to the game by the end of the first period in an effort to conserve energy for the final period. Jim Rooney arrived late in the third.

With the team finally in place, but down 1-4 with six minutes left, a seemingly meaningless goal made it 2-4. But, a late rush by Carnacchi was thwarted by Angers who chased him down and prevented a shot on goal. And, with two minutes left and a power play, the impossible happened. Defenseman Eric Larson scored to make it 3-4 with about a minute left to play.

Pulling the goalie (Patrick Larson), Ruination made another frantic push, scoring incredibly with just sixteen seconds on the clock. However, not satisfied with a tie, the team once again pushed the Dragons back on their heels, and with 1.5 seconds on the clock, Sisolak turned and blasted one low on Alan Cherney, giving Ruination the improbable win.

“We give all credit to Jim (Rooney),” said Chris Sutton (goal, assist). “He didn’t score, he only played three shifts, but clearly he’s a good luck charm.”

Sources noted that this article was “not funny” and wondered why, to which the editor replied: “You want funny? You should have watched the look on the faces of the Dragons fans. THAT… was funny.”