ANN ARBOR– Ever since defenseman Mark Woods vaulted into fame and fortune following his mid-season goal last Spring, “things have spiraled downward ever since,” according to the One Goal Wonder Watch Organization. 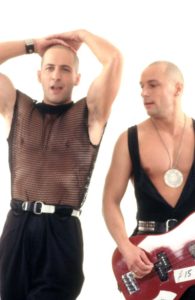 Woods (left) had a short-lived hit with his band Right Said Mark titled “I’m Not Too Sexy” in the early 1990s.

“He didn’t score another goal the rest of the season, and when given a prime opportunity late in the game (Thursday), he failed again,” said OGWWO analyst Tex T. Scamm.

Added Scamm: “That’s the problem with these one-goal wonders. They shoot in and disappear just as quickly.”

The game featured a fast start as Ruination jumped to 3-0 lead over the Dragons early in the first period and cruised to 6-2 win. However, in the closing seconds of the game, defenseman Austin Feeney  fired a pass to a wide open Woods, who missed the shot to preserve the score. Feeney hurled epithets following the play, but claimed not to be upset. “I’m not angry, I’m just disappointed,” said Feeney during the press conference.

Newcomer Kevin Vlazny echoed the disappointment. “How hard is it to hit a backhand one-timer into the net?” he mused.

Woods admitted that he’s been the target of negativity as pressure to score another goal has intensified. “I get harassed in restaurants, refused service, yelled at by people on the streets,” noted Woods.

As of press time, analysts have predicted “even more harassment” for Woods as it was announced Friday morning by White House press secretary Sarah Huckabee Sanders that President Trump just announced Woods as a candidate for Supreme Court Justice of the United States.