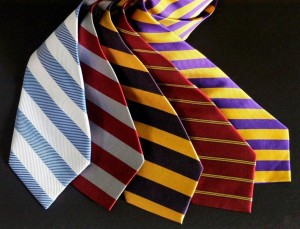 What’s up with all the ties from Ashley’s?

ANN ARBOR– Ashley’s Clothing Store announced early Thursday that it now offers a new clothing option– ties! “We’re happy to announce that we have all the ties you need,” said haberdasher Mark Woods.

The 5-5 collection features ties from Ruination and Hopslam, while the Aventinus line for the older, more refined gentleman features the 2-2 tie. “It’s an exclusive tie, with only seven or eight made,” noted Woods.

The Ruination tie includes the 16 minute penalty design, known as the Winowiecki. “It’s all the rage,” said Woods.

The Hopslam tie has two (Greg) Povenski goals set in it, while featuring assists from designers Ryan Williams (2) and Zebediah Bruckman  (2). “Ryan dis such great work with the Ruination ties, I just had to add him on the Hopslam team,” said Woods. The Hopslam team features four ties for the Winter season.

“Come on down to Ashley’s Clothing,” said Woods grandly. “We have all the ties you need!”